With its 13 golden domes, St Sophia’s Cathedral is one of Kiev’s most impressive landmarks. Construction began in 1037, although much of the Baroque exterior dates from the 18th century.

Named after the Hagia Sophia in Constantinople, the cathedral is famous for its ancient mosaics and frescoes. It also houses the tombs of several Kievan princes, including its founder Yaroslav the Wise.

The cathedral and the associated buildings were declared a UNESCO World Heritage site in 1990. 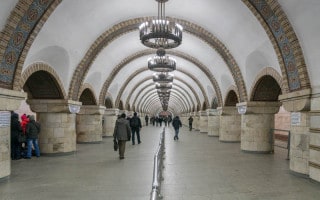