The neighbourhood of Podil was once the home of Kiev’s merchants and artisans. It is linked to the Upper Town by the Funicular Railway and Andrew’s Descent.

The area is relatively untouched by the 20th century and offers many attractions and historical landmarks:

Hotels and places to stay in and around Podil include:

Restaurants and bars in Podil are listed below.

The list was last updated on Friday 29th of November 2019.

Interactive map of Podil. Click on any icon for further information.

Andrew’s Descent is one of the most famous streets in the city. Visit St Andrew’s Church, dine at one of the many restaurants here, visit an art gallery or museum, or just buy some souvenirs. 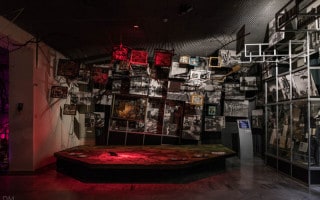 Museum telling the story of the world’s worst nuclear accident.